Copyright 2009-2020 Aircrack-ng Design by Aspyct.orgAspyct.org. Guide to install AirCrack-ng on Mac OSX 10.8 Mountain Lion in 5 simple steps. What is Aircrack? Aircrack-ng is a network software suite consisting of a detector, packet sniffer, WEP and WPA/WPA2-PSK cracker and analysis tool for 802.11 wireless LANs.It works with any wireless network interface controller whose driver supports raw monitoring mode and can sniff 802.11a, 802.11b and 802.11g traffic. Aircrack-ng is a whole suite of tools for Wireless Security Auditing. It can be used to monitor, test, crack or attack Wireless Security Protocols like WEP, WPA, WPA2. Aircrack-ng is command line based and is available for Windows and Mac OS and other Unix based Operating systems. Aircrack-ng is easy to install in Ubuntu using APT. As far as I know, you can't use airmon-ng on MacOs, they're for Linux only. The best way I can suggest for you is using sudo airport -s to determine which SSID and its channel you want to attack, after that, sudo airport en0 sniff x to capture packages of all SSIDs which located at channel x, en0 or en1 is the wifi setting of your mac, you can go to 'About this mac - System Report - Network.

Aireplay-ng is used for replay attacks and as packet injector. It can be de-authenticate users from their APs to capture handshakes.

Aircrack-ng is used to attack WPA/WEP wireless protocols in order to find the key.

Aircrack-ng is easy to install in Ubuntu using APT. Just type the following command and this will install all tools available in Aircrack-ng suite.

In this article, we’ll take a quick look at how to use aircrack-ng to crack an encrypted wireless network (TR1CKST3R in this example) to find the password. 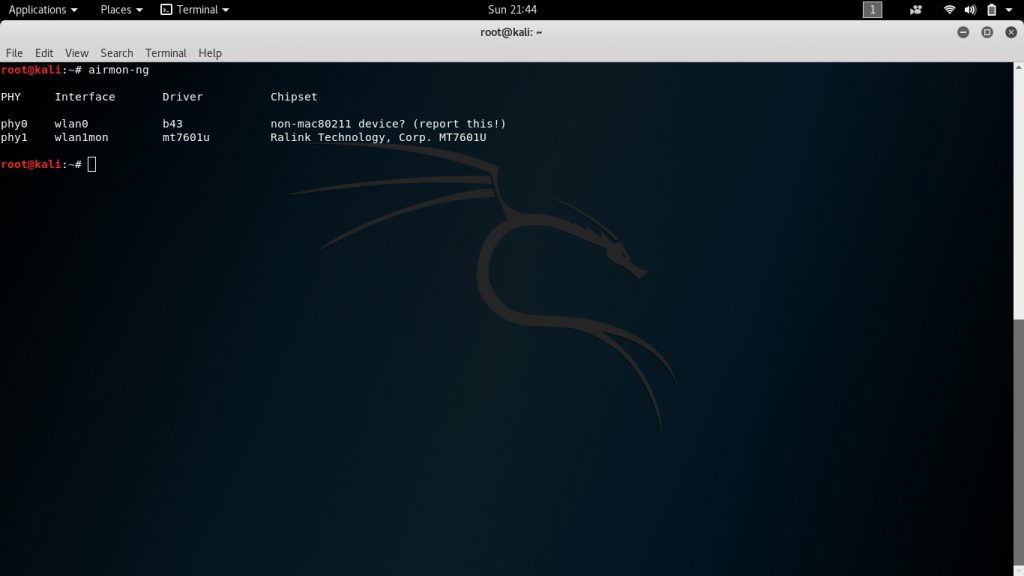 First of all, list out all available wireless cards connected to your PC using ‘iwconfig’ command.

We’ll use ‘wlxc83a35cb4546’ named wireless card for this tutorial (This might be different in your case). Now, kill all the processes running on wireless card using airmon-ng.

Then, use airodump-ng to see nearby Wireless Access Points and their properties.

You can narrow down search using MAC (–bssid) and channel (-c) filters. To capture handshake (Handshake contains encrypted password), we need to save our packets somewhere using “–write” option. Type,

Now, we need to de-authenticate every device from this Access Point using Aireplay-ng utility. Write

Handshake is stored in ‘/tmp/’ directory, and contains encrypted password that can be brute forced offline using a dictionary. To crack the password, we’ll be using Aircrack-ng. Type

Aircrack-ng will go through the list of passwords, and if found, it’ll display the password used as key.

Aircrack-ng can be used to audit Wireless Security or to crack forgotten passwords. There are some other similar tools available for this purpose like Kismet but aircrack-ng is better known for good support, versatility and having wide range of tools. It has easy to use Command line interface which can easily be automated using any scripting language like Python.