Avast Software is one of the most experienced security companies in the sector. As it is available as security software for Windows since the year 1988, just after the launch of the Microsoft operating system. So far it has more than 435 million active users per month worldwide.

Avast Free Antivirus provides all the necessary security features for the platforms in which it is available, which are, Windows, Mac and Android.

Unlike other free antivirus with restricted options and lots of advertisements, Avast Free Antivirus offers you everything you need for the integral security of your computer. However, the full version of Avast Internet Security offers a much broader compilation of tools including ransomware protection, a much safer and more efficient DNS system, as well as a test area to run suspicious applications.

On the official website we can get a list of benefits differences between Avast Free Antivirus and Premium or payment versions. One of the advantages of Avast Free Antivirus, is that while other antivirus require the uninstallation of another product of the competition to be able to install the program, with Avast we can use it in combination with other tools. However, to avoid system conflicts, some modules such as real-time detection are uninstalled and will enter a passive mode of operation.

The installer of the program is quite complete and customizable allowing from the beginning to mark and unmark the options that want to be installed and which not. In total there are 14 modules included that can be activated or deactivated to obtain a custom security profile..

The installation process is also fairly straightforward and requires no additional registration or process. Just run the Installation wizard and follow the steps by activating and disabling functions of the security profile that you want to activate. In addition, those customers who want to download the application for Android, as well as the antivirus for computer, also has a free version quite functional and another payment.

Like most antivirus market, Avast Free Antivirus includes several types of custom analysis. However, the most thorough comprehensive analysis that the system files also examines may be too long and demanding of resources. In addition, we have to clarify that once detected possible infected files can only be eliminated with the full version.

To better optimize the resources of this free antivirus we suggest limiting the scanning option to smart Scan, which only analyzes the user files and programs installed to detect malicious software. Once detected, Avast will offer various options that include from deleting, omitting or quarantining.

Avast Free Antivirus also includes a very complete module about security in Web browsing, a feature that is usually found in premium or paid antivirus. This function is synchronized by its extension for the Google Chrome browser that works especially well in the detection and analysis of malicious software in the pages that you visit without affecting the system resources sending alarms in real time in case Some threat is detected.

It is also particularly noteworthy its network monitoring module that scans local networks by detecting and reporting on connected devices. A very useful function to know if any unauthorized person is using the WiFi connection. Additionally, this module also reports and alerts you to other possible network security issues, such as weak passwords, poorly configured networks and other common problems.

Software Update is another module included in Avast Free Antivirus especially useful that allows to scan the software installed on the computer to prevent vulnerabilities that are usually exploited in the updates. The antivirus detects the missing files and downloads to patch the bugs. This module is compatible with a wide variety of programs, such as Adobe Reader, Air, Opera, Flash, Java, Google Chrome and Firefox among others.

The Games module or game mode includes a set of functions specially designed for gamers, since it allows to disable some of the notifications of the antivirus temporarily and to accelerate processes in background to optimize resources of the computer During the games.

The tests carried out on Avast Free antivirus by AV-test show that Avast is currently one of the most powerful antivirus in the market blocking up to 100% of the threats, as shown in the last February report of 2018.

In the AV-comparative report between July and November 2017, it stood at the tenth place of 21 with a detection rate of 99.5%. This puts the efficiency of Avast antivirus above the average market, just below some of the most representative companies in the industry such as Kaspersky, Esset, McAfee and Avira.

Avast Free Antivirus is currently one of the most solid antivirus in the sector, both for the efficiency in the detection of threats and for the time of the company’s trajectory in the market of programs destined to the integral security. Its interface is minimalist, modern and simple. However, it has a large compilation of customization options, which, although it can be appreciated by the most expert users, could be somewhat overwhelming for novice users who would need to invest some more time in their management. 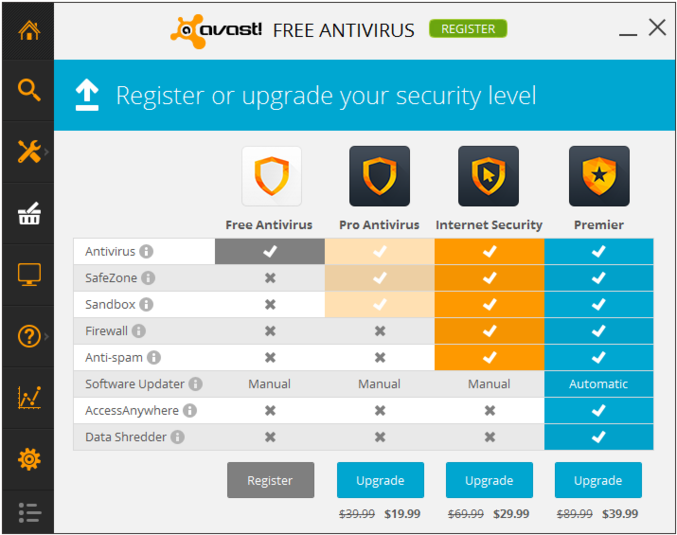